At 3:34 a.m. on Saturday, February 27, when the fifth-strongest earthquake ever recorded hit a large area of Chile, I was sleeping with my wife in a hostel of Pucón, a beautiful town in the Lake District of the country. Even when Pucón didn’t receive the strongest impact of the earthquake and we suffered no damages (as a matter of fact, I went back to sleep a few minutes later), when I woke up the next morning, I realized three things: how lucky we had been; that returning to the north of the country that day as planned would be a great adventure; and that I should report to my TV station as soon as I could.

A few hours we made it to Ruta 5 Sur, the country’s main highway, we managed to connect to the Internet via a mobile broadband connection. Most of the telephone lines of the country were not working, so we didn’t find out that our 2 year old son and the rest of my family were alright until we talked to my brother, who lives in Switzerland, via Skype. He had been following the events of the earthquake since the European morning,

and had learned about our parents through a cousin who lives in Australia, and had somehow managed to talked to her parents, who were vacationing next to ours.

Then came work. Somewhere in a long detour from the destroyed highway, in the middle of a long line of cars that slowly crossed through Angol, I managed to make a phone dispatch (via Skype) to NY1 Noticias. In the next days, I combined meetings with family and friends with a series of phoners for Noticias and its sister station, NY1 News.

Here is a video dispatch I made for the show of my friend Juan Manuel Benítez, Pura Política: 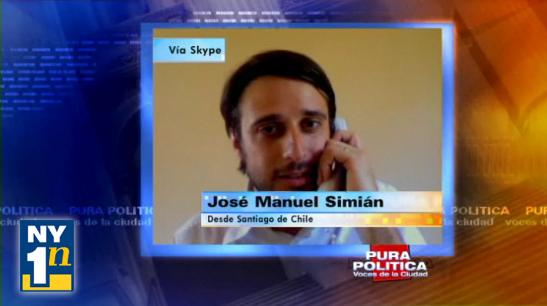 Back in New York, I was invited to participate in NPR’s Tell Me More to talk about the earthquake and the undergoing inauguration of President Sebastián Piñera. [Listen  here.]